A Parable from Silence 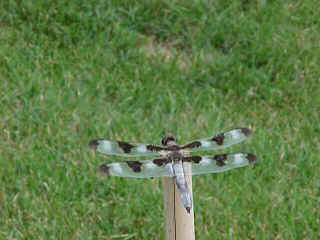 About 3 weeks ago, before the family went on a short vacation, I needed to mow the back lawn. I got on my small riding lawnmower and proceeded to mow the few green parts left. (The rest of the backyard is a pattern of brown pee-pee circles created by our Labrador Retriever LOL) Anyway, while I was mowing along, a large dark, loud, fearful looking insect came straight at me out of nowhere. A huge rush of fear-filled adrenaline exploded in my brain and I reacted by jumping off the mower and ran for cover-anywhere that this monster of a beast was not!

At that moment, I was not. There was only the fear which was followed by some thoughts about being bitten or stung by this terrible menace. It was amazing that I was aware of all this happening, as it occurred. So having recovered somewhat, I very swiftly walked into the house to calm down. I was very disappointed that here I was, this towering giant (in Dragonfly standards) and I was undone by this relatively small creature. I thought I had no fear of bugs, having dealt with 3 inch cockroaches in South America and Southeast Asia, and having been stung a few times by the good ol' U.S. Yellow Jacket. Obviously somewhere in my memory, or perhaps in my DNA itself, there was a frightful aversion to this giant bi-plane dive bomber. I had to know more.

I went onto the Internet and began to read about Dragonflies. What I read amazed me. I won't bore you with all the details but here was a creature older than the dinosaurs by millions of years, a creature which has not changed much through evolution (apart from not being it's ancient size: A THREE FOOT WINGSPAN!!!!!) and is a gentle, non-biting, non-stinging relative of butterflies and moths. And here is what touched me. Most Dragonflies only live for a few weeks. With that in mind I hurried out to the backyard with a mantra "they do not bite, they do not bite."

I went to the area of the yard where I had been assaulted, stood very still and waited. Sure enough, the creature approached me, as if we were drawn together by some ancient mystical attraction. It buzzed me a few times and then did a remarkable thing. It hovered a few feet from my head. It was almost as if it was facing it's own fear or instinct to escape or attack. It was checking out this large life form called a human and remaining still. Then the bug settled on a tomato plant stake. I sat down on the grass and we were there together, each life form relaxing in the presence of the other, nothing to say, nothing to feel, no fear, just a simple sharing of that moment. It was then that I noticed it's absolute magnificent beauty. It had black and white stripes like a zebra and so we named him (or her) Zeebie.

In the following weeks Zeebie was always there, always checking us out, always near the tomato stakes. As a matter of fact, at one point there were 6 or 7 Zeebies buzzing around, dancing together. I introduced my children to him and them and we enjoyed their majesty, their grace, their formidable appearance and mostly when they landed on the stakes, resting, just being, in black and white.

It's been two days since we've seen any Zeebies. Perhaps they are gone. Perhaps they have disappeared into the Pure Silence from which they had arisen. Perhaps we will never see Zeebie again. All I know is that this beautiful insect, this glorious form, had taught me more about myself than any book or any teacher. I am thankful to him, for his arising, for the miracle of his coming to meet me and now for his departing. And isn't this the simple meaning of life, of Pure Silence? It is right here, every second if we would just be aware and awake. All we need to do is look, listen and allow it to be.