Leaving the Shores of Belief 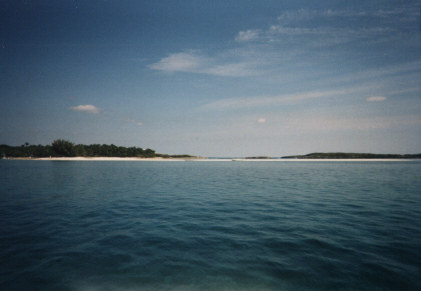 To leave the safe shores of where we think we are and venture into the wide expanse of the sea of silent awareness itself is a scary proposition. The abyss of eternity is too vast, too unknown, too big for many of us. Yet, leave the shores of tradition, familiarity and belief, is what we must eventually do if we want to be totally and permanently free, once and for all.

To allow for the realization of Pure Silence, the awareness of now, the truth as it is, you must have a fresh unencumbered mind. This means not only surrendering the surface clutter of worries, anxieties, nostalgia, guilt, desires and fantasies (all most difficult to let go of-but let go you must), but (and here's a real biggie - ready or not) you must abandon all your traditional beliefs, your concepts of religion, faith, hope and most especially of God itself. Remember you are realizing that which is permanent, eternal and present now, that which is beyond concept, beyond fabric. We are looking together to see what not only holds the fabric of existence itself together but what allows the seams and stitches to be, what allows their very pattern.

For most of western humanity, God is merely a concept, a theology, an ideal or some super being, someone to be placated, to be feared, to be worshiped, to be prayed to. I'm sorry but to limit that which is infinite love itself to some vestigial object, to a being, a person, someone or thing we can name, provoke, control or possess is absolute silliness. That which encompasses all being is Pure Silence itself. That which is religion is merely some human words or thoughts about that which is beyond word, thought and worship. Following a religious tradition, what is it that we are  doing? It seems to me that we are merely following somebody else's insights, whether that somebody is called Jesus or Buddha or Krishna or Mohammed. All of these great men, women, deities, whatever, are pointing to something beyond themselves, to something always here and something that is not philosophical or theological, to that which is within all, sustains all and is larger than all and that which is experienced by all.

To realize Pure Silence now, you must abandon all thoughts for this second, even the beliefs that you have cherished forever. Your beliefs are merely thoughts and what's more they originally were someone else's before they became your own. To see or know or realize that which is infinity itself, we must come absolutely naked. And in that complete, destitute and utter nakedness, perhaps we may come to a simple glimmer of that which is now, that which is you now, that which cannot be named or sublimated into a teaching, a prayer or anything else.

This is a difficult thing to see because we believe in a thing called faith and belief and tradition. We have been told by parents, friends, churches, temples what the truth is. But I offer you, very humbly, the truth cannot be contained by anyone, any thing, any tradition, any belief. Truth, Pure Silence contains all of them. Stop now, stop everything, surrender to this moment of peace, this moment which is total freedom, total bliss. Just for one second, really admit the truth that you know absolutely nothing, that you are absolutely nothing. If you can realize that right now you will taste the freedom, the essence of what every god, every sage, messiah, prophet, teacher, poet, musician and scripture has been pointing to since humanity crawled from the slime. You will taste the freedom that you already are. And no one, no authority, no system can challenge that or take that away from you. Pure Silence is total gift to you right now.

You are that which is eternal, infinite and love itself. Just breathe that right now in the gentle silence of here.