Belief Systems: The Mistake of Humanity 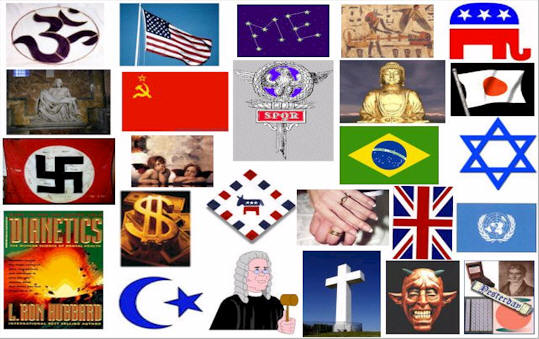 My dear friends, I know I risk alienating some of you by the following words, but the shattered world we live in has provoked me with a sense of urgency to deliver the message loud and clear from the depths of pure silence. I only ask that you read carefully and please reflect fully before you make any judgment. I feel that when you have finished you may find a sense of relief.

You may have heard someone ask you the question: "what do you believe in"? or perhaps you have heard the expression "everyone needs to believe in something." You may have also heard that two ideas never to be discussed between friends are religion and politics. I wonder why people are so adamant that beliefs are some sacred, secret thing that everyone is entitled to hold precious and that discussing them openly might cause a difference of opinion and lead to confrontation. The sad thing about belief systems is that people are even willing to kill and to die for what they believe!

The truth is, that individual, nationalistic and religious belief systems have divided and are dividing the world we live in. They have also divided us from each other and are the source of all conflict today. All one need do is open the newspaper or turn on the TV and you will notice quite clearly how the beliefs that people hold dear are the cause of every friction and humanly imposed calamity on the earth. There are, to name a few big ones: Palestinian vs. Israeli, Fundamentalist Muslim vs. American, Iraqi vs. the Coalition, Chechnya rebels vs. Russians, Protestant vs. Catholic (in Ireland), North Korean vs. South Korean, Basque separatist vs. Spanish, Terrorist vs. Westerner and Indian vs. Pakistani. There have been many more in the history of our civilization: too many to count actually! And there are so many more and perhaps not as blatant nor resulting in war but they exist nonetheless: Pro Choice vs. Anti-Abortion, Republican vs. Democrat, Liberal vs. Conservative, husband vs. wife, establishment vs. youth and on and on. Bottom line: if you and I believe differently, then we will be separate from each other.

Every religion, every country's nationalistic policies, every ideology and philosophy is based on this simple fact. Once upon a time, perhaps long ago, a human being alive in the world confronted life, death, emotions, people and things around him or her self and formed some conceptual ideas or thoughts about what the truth is, about what reality is or what it should be. Many of these folks shared their thoughts with others either by word or through voice and deed. Other folks agreed with them, followed their ideas, formed groups, churches, temples, countries, societies, and so on. Again, the basic fact is that someone had an idea or thought and others concurred. Religions were born. Great ideologies created. Philosophies composed. The rest is history. But I ask you a simple question: every belief purported was deemed to be the truth by those following it, and if everyone one holds this opinion, then obviously those beliefs which differ cannot possibly be the truth and inevitably must be in conflict with the concepts one holds as true and sacred, so what is the truth then?

Perhaps there is some small glimmer of truth in most belief systems but because of cultural conditioning, the truth has been disguised somewhat and in a sense camouflaged and become somewhat inaccessible to those not of that particular culture. On the other hand, perhaps because of humanity's gift (or curse) of an analytical evolved mind and the ability to think, rationalize and symbolize, we have gotten too wrapped up in the symbolizing and rationalizing and even personifying truth and we indeed have lost sight of the reality itself.

The problem with all belief systems is that they can condition us in how we think, what we say, how we act, what clothes we wear, foods we eat, how we vote, how we treat those who do not share our belief system, etc and all are contradictory to the basic human freedom to be and partake of the openness of life which is awareness itself. To sustain themselves, belief systems need followers and the followers need to distinguish themselves by dressing the same, using rituals and rites, eating certain foods, having creeds, bibles or constitutions, meeting together to agree in public with the beliefs that are shared: often there is flag waving, grand celebrations, declarations of strength, sometimes suicide pacts, Liturgies, orgies, hierarchies, tithing and collections of donations for the cause and so on.

Beliefs are thoughts that we form or follow to bolster the sense that we are individuals, that we are persons. In a sense, a belief system, in which many believe the same things allows these individuals to band together to form larger groups, even countries, societies, and religions which have billions of followers. The basic flaw in all this, if you have read much of this Pure Silence web site, is that we are not persons at all: we are the silent awareness of being itself. This awareness needs no belief. This pure silence cannot be defined and cannot be squeezed into some ideology. This moment just is: whether you believe that there will be a future moment or a heaven, or whether you believe that you are a somebody who is defined by what you think and have a birth and a past, etc. I could go on and on about all this-the point is simple: you are not your beliefs, so why struggle to maintain something like this? Think of the energy you are wasting in your ritualistic thinking and more by the guilty thoughts which may arise in your mind that you are not following what you have been taught or brought up to believe is true. There is a solution, very defined, succinct and clear. I shall end this page in the words of the great teacher Jiddu Krishnamurti:

" Stop believing in anything and you may find that which is truth itself."